Everyone should know about the best flash games so that while you are getting bored with all the stress of work, you can enjoy some quick games without even having to install them at all. I mean what else you can want more other than playing some absolutely free games online.

Look for the Flash game's link. A Flash game's URL will have '.swf' somewhere near the end of the link, and you'll usually see the game's name and/or 'game' in the URL. There are usually multiple instances of SWF files on the page, so you may have to scroll right or left for a while before you find the correct one.

So, for the people who are looking for a quick and instant escape from work and all the pressure then you can check out this list of top 10 flash games here. From action to interactive and to strategy making, I have tried to capture some popular genres here with even more popular options of games belonging to them.

Kingdom Rush is amongst really cool flash games which is a type of tower defense game. The game features a medieval fantasy setting where the player is supposed to build towers on the pre-determined paths. Empty lots are allotted for this and player also have the option to choose from various types of towers.

Kingdom Rush is all about generating money and then using it for making towers. So, the player starts with certain amount of money from which he can buy towers.

Now, as the enemies start to emerge, player needs to kill them before they reach to the defense side. Killing enemies generates more money which can be spent according to the choice of the player. Player can use this money in upgrading towers too.

Drakensang Online is another option for the category of best flash games. It is developed by Bigpoint Berlin and released in 2011. This is actually a type of freemium game belonging to the genre of online role playing which is actually quite similar to Diablo series in terms of gameplay.

Being a type of MMORPG, Drakensang Online earned huge popularity and it is played from an isometric perspective.

The game starts with the player creating a character from given four classes and other set of attributes. Player can either play alone or in groups too. Player needs to explore around in the open world of Drakensang world and proceeds further by completing quests and missions.

Player can also purchase weapons and upgrade items by the in-game currency Andermant. As compared to other browser based games, Drakensang is way advanced because of its superb graphics and in-depth of the game. Other important part of game is to kill the monsters and you can also purchase the game items with real money attributing to its freemium model.

Another MMORPG in the list of best online flash games is Realm of the Mad God. Published by Deca Games, it was released in 2011 and also uses the elements of role playing in it perfectly. The game is centered on the Realm of Oryx and displays a very cryptic and scary place.

Although, the game is free to play but you can do some micro-transactions for buying weapons and other items in the game.

The player starts with a map which helps in travelling around in the gaming world. As the players proceeds and shoots enemies by throwing projectiles, he earns experience points in return. When these points reach up to a definite amount, the level and difficulty of the game is automatically improved.

Definitely, a treat for the people who are looking for best flash games as Realm of the Mad God is highly popular in that category. In fact, apart from the player, other characters add more variation in the game and hence you never a dull moment while playing it. It also features the cooperative mode where you can chat with other players to play as a team.

Line Rider is an internet based game released in 2006 created by a student. It instantly became a huge hit and hence I decided to enlist it in the category of best flash games. The game is not only fun but also used for educational purposes too because of the use of physics theories in it.

The main character of this game is Bosh and quite like the name of this game, you are supposed to draw one or more lines through which this character Bosh on his sled can ride.

After you are done with the creation, you press play for the game to start. The game certainly has no end and no set goals but inspires people to think in the best way possible. By keeping in mind the simple laws of physics, people needs to design such tracks which are smooth enough to not let Bosh fall of the sled.

This creative concept spread like wildfire at the time of its released and hence the game was better named as a web based toy. You can literally create whatever track you want like loops, mountains etc. to add the level of difficulty in the game. Developed by PopCap Games, Bejeweled 2 is a type of tile matching puzzle video game and also has various extensions of its original game. Such types of flash based games are the most involving ones, kudos to their interesting theme, people literally never get tired of playing them and matching tiles.

Bejeweled 2 is based on the Shariki game mechanics where you need to swap between two tiles in order to finally make a chain of three or more similar tiles to eliminate them.

In this game, these tiles are featured in the form of gems of various colors which looks quite catchy. It features various types of game modes too where some of them can only be accessed after successfully cracking puzzles and other mini-games.

The game is very popular and also addictive too and once you will start playing it, you can discover more about it. From various gaming modes to special gems, it has great variations which makes it one of the best flash games.

A puzzle based game, Portal is developed and published by Valve Corporation and was released in 2007. Portal is focused on the theme of science and features the concept of teleportation between two flat planes with the help of inter-spatial portals.

The player takes up the role of prime character Chell who is challenged by an AI named GLaDOS (Genetic Lifeform and Disk Operating System) to complete each puzzle representing various levels of the game.

Portal utilizes the concept of physics where with the help of conservation of linear momentum, the player needs to travel through the portals. The game is set from first person perspective where these portals create connection between two different locations in three dimensional space.

This is the most difficult and challenging option in the list of best flash games and features a wonderful concept of physics which makes it perfect for educational purposes too. Player must take care of the speed and direction while entering a portal because it remains the same while exiting it.

Next option for the list of best flash games is Super House of Dead Ninjas which is a type of platform game. It is developed by Megadev Games and released in 2013. This browser based game can be played in single player mode and available in completely freeware version. 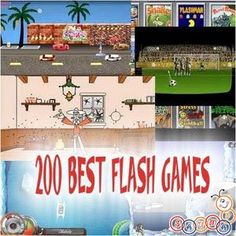 Of course, as the name of the game clears it all, the player takes up the role of a ninja and the plot takes place in a randomly generated 350 storey tower.

The player is supposed to get out of this 350 storey tower as fast as they can. The game is time bound which means you will automatically die when the time gets over. However, there are timely power-ups available to increase the time span of the game.

In this quest, player also needs to fight with enemies too. A meter shows the power up stats and killing enemies at this time increases the time span of power-up period. You can also upgrade your weapons and items in this game too.

Dino Run is counted amongst the top flash games which is based on the theme of side scrolling and running. This flash game is created by PixelJAM and released in 2008. The visuals are created in simple pixel art and utilize 8 bit sound.

The player assumes the role of a Velociratpor whose goal is to escape the wall of doom in a dangerous side-scrolling world.

You can control this dinosaur through WASD/arrow keys. The theme of this game is set around the time of the apocalypse and simulates a very realistic feel. Throughout the game, the dinosaur can collect eggs which results in evolution and increase in abilities too like jumping, additional strength etc.

It is one of those few best flash games which comes with a set goal where the dinosaur needs to reach to the Sanctuary alive. Additional versatilities are added by various levels of difficulties and levels like approach. The game also released in an improved version too.

Desktop Tower Defence, as the name says it all is a type of tower defense flash game created by Paul Preece and was released in 2007. Another choice for the category of best flash games, Desktop Tower defense can be played in both single player and multiplayer modes.

Available in various languages, it is one of the most popular game having sold over 15.7 million and also listed amongst top entertaining web applications.

DTD is played on a map where the ultimate goal is to stop the enemies known as creeps from entering a set point in the game. The player can build various towers and buildings in order to stop enemies and ultimately killing them by upgrading the towers.

You cannot make the exit inaccessible to the enemies but you have to build the towers in such a way that it becomes almost impossible and unviable for them to reach out there. The main element of the game is revolved around making strategies only. There have been many good flash games enlisted here and the last one to joint this list is Auditorium. It is a type of music based puzzle game so you will be required headphones here. It is created by Cipher Prime and was released in 2008.

Auditorium is a strategy making which can be played in single player mode. With the help of various game mechanics, player needs to bend the streams of light to fill the audio containers.

Once the container is filled, it produces an audio channel introducing an instrument’s sound which is then added to the game’s music. The ultimate goal is to reveal the complete soundtrack of the game for which each container must be filled simultaneously.

Auditorium is a unique option in the list of best flash games where strategy plays a very important role and the ultimate control lies in player’s hands only. Modifying the trajectory is the ultimate aim of this game.

One thing which you are supposed to check up is to update or active your Adobe Flash Player before playing these games otherwise they are not going to load at all. These best flash games are way simpler but quite addictive than the conventional games and this is the beauty about them.

These browser flash games are compatible to all the popular browsers and also takes no time in loading too. So, it will be hardly an affair of 5-10 minutes and you can save yourself from getting all worked up and tensed from the day-to-day schedule of yours.