New 15 missions are full of battles. take your company and kill all enemies. you are able to use tens of weapons. kill them a..

Dark forces are attacking your world. cruel evil invaded your village. you have to stop him! defeat all monsters. in battle,..

Missile strike is a classic missile defence game, where you aim target to destroy incoming comets and meteors and defend your..

In disaster will strike 6, you will need to think harder than ever to crush all the eggs and complete each level. strategical.. 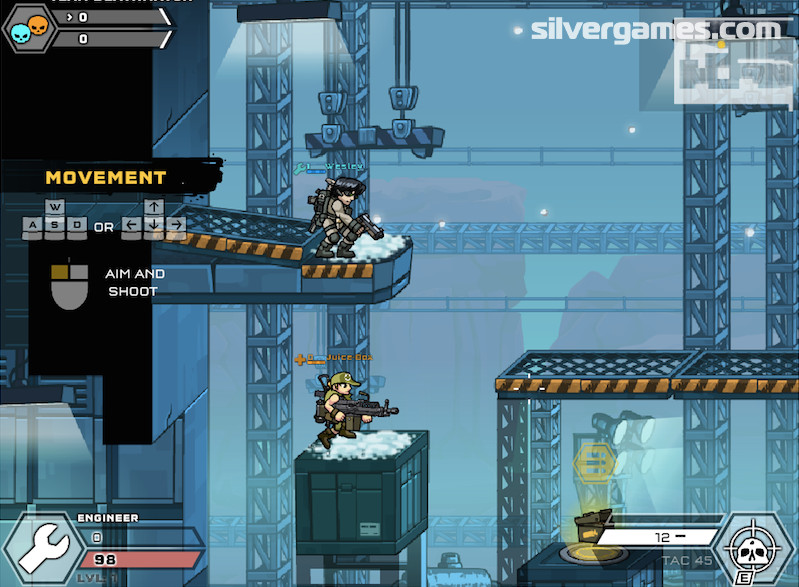 Hero of jelly needs your help. free the hero of jelly out of the catacombs of spacecraft which is owned by galactic pirates. ..

Battle force is not just a shooting on anything that moves. it is also about collecting money, power and other advanteges. ho..

Our hero cedric protects his land for over 300 years. now, its his sons folcardos turn to take over his role. in this idle ga..

As a hero, defend your fort against attacking enemies. you will have 3 different types of weapons (rock, bow, gun) and it is ..

Can you find all 30 magical artifacts with a total of 20 different characters and 5 brave heroes? Save the imprisoned princes..

Time of mighty men is not over yet. become a brave hero and slay hundreds of ruthless enemies. when you pass through the vill..

Meet the second part of a fantastic game “Strike Force Heroes 2”, in which you have to play as a great warrior, and perform various tasks. Continuation of the legendary shooter game starts on an unidentified space station. After the space mission you find yourself on a hero base somewhere in South Africa. Only you managed to get approval of distinguished warriors, the base gets attacked and you have to fight back, together with your comrades. In most levels, you will kill enemies and save the innocent people. After accumulating certain experience, you will be able to buy weapons or other equipment in the store. Customize your soldier; you have thousands of weapons in your arsenal, armor and upgrades in this epic, futuristic shooter. Kill the enemies and pass to the last level. In case of death you can change the type of fighter and pump characteristics and parameters, to win battles. You can take the job in the campaign, competition or quick battle to the death; get a medal for the differences. As in the first part of the strike force each soldier has his own skills, improving defense or attack, and super-abilities, causing super-blows at the enemy and helping brothers-in-arms. Each warrior has his own arsenal of pistols, submachine guns, machine guns and other weapons, as well as bullet-proof vests and other useful ammunition. Also, the game has a slot machine added to a gaming process- one-armed bandit, where you can take the jackpot or win rare weapons. At this time your team will consist of five soldiers: engineer, mercenary, general, sniper and juggernaut. Engineer Nathan – 33 years old Canadian. He has served 12 years in the army. But eventually he was demoted for the thirst of reckless glory. In years of hard training, due to unique abilities, he was admitted to the band of heroes – indispensable as a team supporting fighter. Mercenary Dex – 42 years old American, used as a soldier of fortune and is not direct member of the brigade. He was hired for money because of aggressive nature and special combat skills. He specializes in machine guns and explosives, after pumping can easily cope with the superior forces of the enemy. West Briton – 51 years old General. His old team was disbanded after the betrayal. Details are unknown, and he, as a gallant soldier, resigned and joined the team of heroes. Sharpshooter, easily finds vulnerabilities of an enemy, and is unmatched in melee. Thanks to “leadership” past easily raises team spirit. 23 years old Korean sniper Jin – has always been different thanks to his watchful eye. After serving in the army at a young age, became a consummate sniper. Noticing his ability, heroes took him promising many adventures. Strikes enemies in moments when they are most vulnerable, and thanks to his past has unique skills. The last one is Juggernaut, name, age and nationality is unknown. He has spent that much time in the organization that no one really knows nothing about him. He is used in the most dangerous missions where superhuman endurance and power are needed. For the size and weight was nicknamed as Tower. With powerful armor and powerful melee weapon he is used as tank, smashing all obstacles. Each fighter has several types of helmets and equipment at his service, all of which will be open by a certain level in the game. Also a big choice of suit colors will be available with time. The game has a lot of medals for certain achievements – for the completion of the company, passing the mission on Hard difficulty, for the use of special moves and money spent. Secret medals are also available. Free shooter that will make you recall how to quickly pick up health packs and ammunition, and how to reload hiding from your enemy.